Juventus has always been an excellence of Italian football. Its slogan “winning is the only thing that counts”, even though it gives an idea of the club’s hunger for victory, does not describe the process by which the team prepares the way for success. Professional football teams are now real companies, and Juventus is a leader in its sector.
In order to always consolidate their position of domination, the reigning champions of Italy cannot ignore the fact that they are ahead of their competitors in all aspects of planning and decision-making, and the management of the youth sector is the emblem of this. Last season, with the entry of Juventus Under 23 in the third division championship, it was already possible to appreciate the birth of a new Juventus model that has aligned itself with the long-standing work of the great European teams. In the second year of the project we can take stock of the growth of the boys who have divided between the C series and the spring 1 championship. Through the sportsdata footurelab we analyze the return rounds of profiles able to be protagonists in the 2019/2020 season both in the third series and in the Under 19 championship being still at high altitude for this category.

Paolo Gozzi – Rafael Fonseca:
Both 2001, have almost always occupied during the last season two places out of four of the defensive line of the team of coach Baldini while despite some convocation have never set foot in the field in serie C.

This is their general attitude

Generale attitude of Gozzi and Fonseca

Leaving aside the obvious difference in attitude typical of a central defender (Gozzi) and a full-back (Rafael Fonseca), we can still see how the two players during the game focus more on the defensive phase and the offensive phase.
In order to effectively summarize Gozzi’s defensive phase, we can refer to the duels and to the fact that it takes into account all his defensive qualities according to parameters such as the effectiveness of the gesture and the area of the pitch in which it occurred. 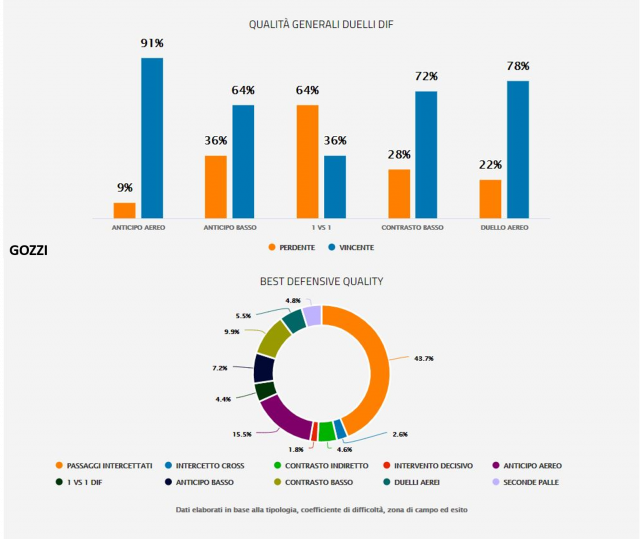 Despite having good numbers in the duels, the elaboration indicates that Gozzi is more efficient in the defensive phase through the reading of the opposing passing lines. This is probably explained by not exceptional numbers in reference to the situations of 1 vs 1 live in which he was engaged.

1 vs 1 defensive and intercepted pass Gozzi

These are the offensive qualities of Rafael Fonseca

The impact of Portuguese on the offensive phase is especially evident in its demarcation, duels in general and 1 vs 1. 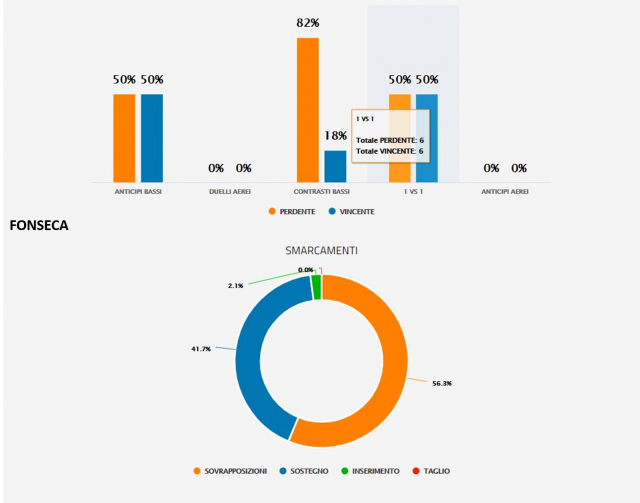 These data show how Rafael Fonseca ensures a constant push forward on the right, but also the potential for improvement in the last pass:

Unlike the defense teammates analyzed above, these two profiles did not have fixed positions in Under 19.
Nicolò Fagioli was the pride and joy of the Juventus youth sector and he played all the roles from midfield upwards, often catalyzing the development of the Juventus offensive game.

Example of participation in the building phase of Fagioli

With one year less than Fagioli (2002, 2001) and fewer appearances behind him, Ahamada distributed his Under 19 appearances between the role of defensive midfielder and that of attacking midfielder.
Mainly occupying these positions, Ahamada could not avoid active participation in the defensive phase of his team.

Both players have techniques to sell but Fagioli in the FootureLab database emerges as one of the technically strongest players of all Primavera 1.

The last profiles passed in Footure lab analysis are Elia Petrelli and Pablo Moreno.
The first (class 2001) led the attack of Juventus as the first point but already from his general attitude is understandable how it is expressed as the typical covering forward.

Petrelli’s contribution to the Under 19 attack is clearly shown in several sections of the Footure Lab report, giving a clear idea of the young player’s characteristics and certifying the assessments made to the naked eye of the experts.

Offensive attitude and motions of Petrelli

Pablo Moreno arrived last season on loan with the right of redemption set at 700,000 euros, has established himself as an external attacker in the Under 19 despite his young age (class 2002).
Among his offensive motions there is a logic of prevalence of those in width, but the numbers of other types combined with the data on the finishing passages are such as to certify a capacity to vary increasingly sought in an winger by modern coaches.

For Moreno, there is potential for improvement in ball protection, a very important area in which Petrelli has good qualities.

The ball protection of Moreno and Petrelli

Among the young players analyzed, only Fonseca and Ahamada have not yet made their debut in professional football and Italy looks with curiosity to the next step of a growth model of the young player for her new. With the football market closed and the consequent inability to loan their young people, the old lady will decide to employ them again in the Under 19 or to launch them definitively in the fray of the third national series?