The Primavera 1 championship is about to begin its fourth round of the first round and as a result many players born in 2002 were able to make their debut in what is the prelude to professionalism.

Pirola and Dalle Mura are two examples of promising young players who, although they have always been columns of the various national under teams, until the current season have not had to deal with the Under 19; this has certainly not stopped us from giving them the starting jersey of our F2002ure Team, armouring the defense along with Gasparini, Udogie and Tibo Persyn.

In today’s appointment we will go into the heart of the midfield of our selection through the analysis of two profiles as different from each other as from perspective: Michael Brentan and Abel Kanyamuna.
Padova, Venezia and Juventus are the three teams that have marked Brentan’s youth career, just passed through the ranks of Sampdoria on loan from Juventus.A native of Zambia, Kanyamuna arrived in Italy thanks to a scholarship and after some minor experiences between Ponsacco and Pistoiese he was noticed and e-marked by Cagliari Calcio. This is not the only difference between the two boys.

The Cagliari midfielder can already boast 9 under-age appearances in Primavera 1 in the 2018-2019 season, while the Italian, despite not having had the opportunity to play against his biggest opponents, can boast of second place in the Under-17 European Championship.

From these experiences, through the analysis of sportsdata, Footure Lab will compare the characteristics of the two players with excellent potential.

General attitude of the two midfielders, through the processed data

Although both have a prevalence of defensive phase, Brentan proves to be particularly well suited to affect the moment when his team is not in possession of the ball.
In this analysis, the elaboration of the data according to parameters such as the efficiency of the action, the area of the pitch in which it occurs and the value of difficulty is decisive.
Comparing the contributions in the finishing zone of both, it is clear that although Brentan found himself several times in the opponent’s half of the pitch compared to his peer, his offensive phase was not as efficient as his defensive phase.

Analysis of the type of finishing

Example of wrong finishing of Brentan

Despite the fact that the last pass has to be improved, Brentan’s skill in the offensive phase remains to be liked, as he is able both to enter the opponent’s area with some constancy and to be found in support of his team-mates.

The Cagliari player, on the other hand, shows excellent technical skills both in ball control and in passes.

Statistics of ball control of the two midfielders

Example of vertical pass of Kanyamuna

As far as the defensive qualities of the two midfielders are involved, this is the data produced: 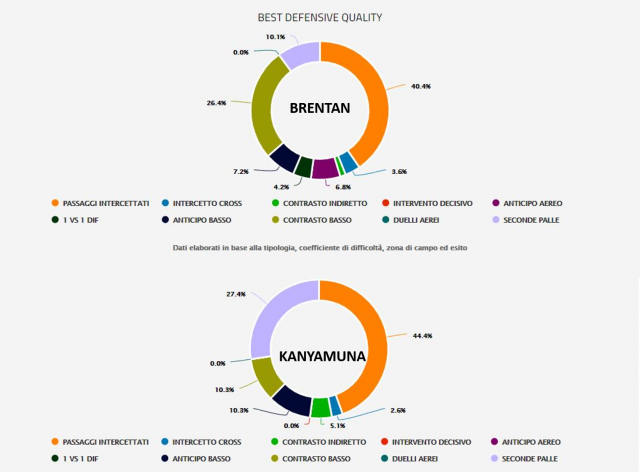 It is clear that Kanyamuna is less committed to the pure defensive duel than the player of Sampdoria, who shows an attitude more oriented to contrast.
This analysis of the data should be seen in conjunction with the fact that although both played in a midfield with three players in the 1-4-3-1-2 system, the Cagliari midfielder played the role of play in front of the defensive line while Brentan played as a right offensive midfielder.
The portrait of the two players is even more evident from the graphics showing how and where they recovered the ball. 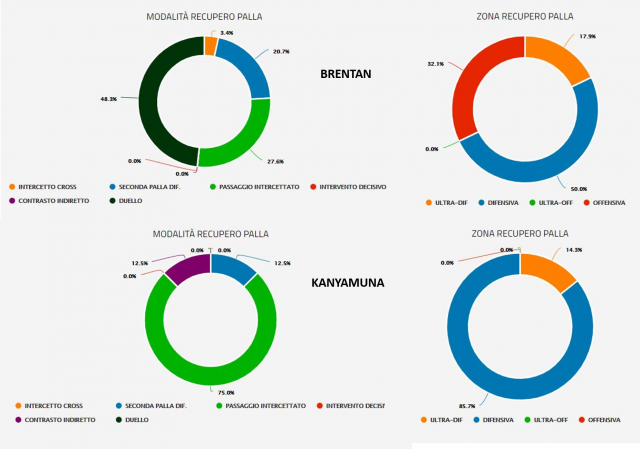 In this start to the league Kanyamuna has predictably imposed itself as the center pitch of Cagliari while Brentan, after the bench of the first match, has already taken his place as a starter.
For this reason, our F2002ure Team delivers, for now, the number 4 jersey to Abel Kanyamuna alongside two excellent elements of Juventus that we talked about twenty days ago. 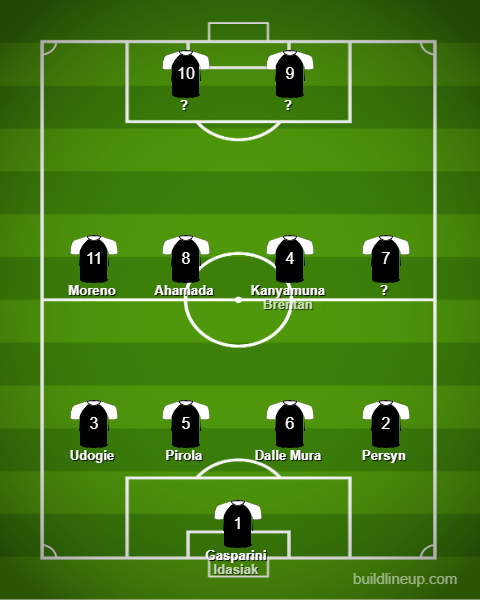