We use the Primavera 1 championship break to complete the Top 11 of our F2002ure Team. The team completed nine elevenths, “only” two checkers are missing: the forwards.

The two forwards (born in 2002) in the first year of the best performing category in this season certainly proved to be them: Brian Oddei and Gaetano Oristanio.

Both born in September and both of the dominant left foot, have had two different growth paths.

Brian Oddei was born in Modena, but when he was still very young he returned to Ghana, his parents’ hometown. No football school, no sports club, where he grew up as the champions of the past did: playing in the streets. At the age of 13, he returned to Italy, to Maranello, where he played for a year in the local team. The following year the turning point: he was observed by Sassuolo who enrolled him in their Under 14 team. It is here that Brian begins his real path of growth; Sassuolo over the years believes in him and in the first year of his category he is a member of the Under 19 team.
Gaetano Oristanio, instead, was born in Vallo della Lucania, in the province of Salerno, and started playing in Roccadaspide. He then moved on to the Accademia Peluso, a club in the province of Avellino, where he was kept under observation by Inter, which decided to join him in 2016.

From a tactical point of view, they have a very similar position on the pitch: they both play as right central strikers in a 2 striker (Inter plays with 1-3-5-2, Sassuolo alternates 1-3-4-1-2 with 1-3-5-2), although their interpretation of the role is slightly different. Oddei acts mainly as a second forward but with movements often associated with those of the winger; Oristanio combines the characteristics of the second striker with those of the offensive midfielder. We will deepen this aspect in the following sections with the support of our data.

In the current season, Oddei has collected 21 appearances, all as a starter, while Oristanio only 10, most of them taking over from the bench. Both of them have very high-performance indexes: Oristano’s one, compared to the minutes played, is even higher than Oddei’s and not by a negligible amount. In essence, Oddei is a player with a safe and constant performance, while Oristanio is the classic player who can change the course of a match with his flashes.

We now see their characteristics in detail through the sports data collected and processed by us at Footure Lab in the context of this season’s Primavera 1 championship.

Their general attitude is offensive, as expected. What differentiates them is their different contribution to the remaining two phases: Oddei has a greater incisiveness in the non-possession phase, while Oristanio, who has to grow more in the latter, gives a greater contribution to his team in the playmaking phase. 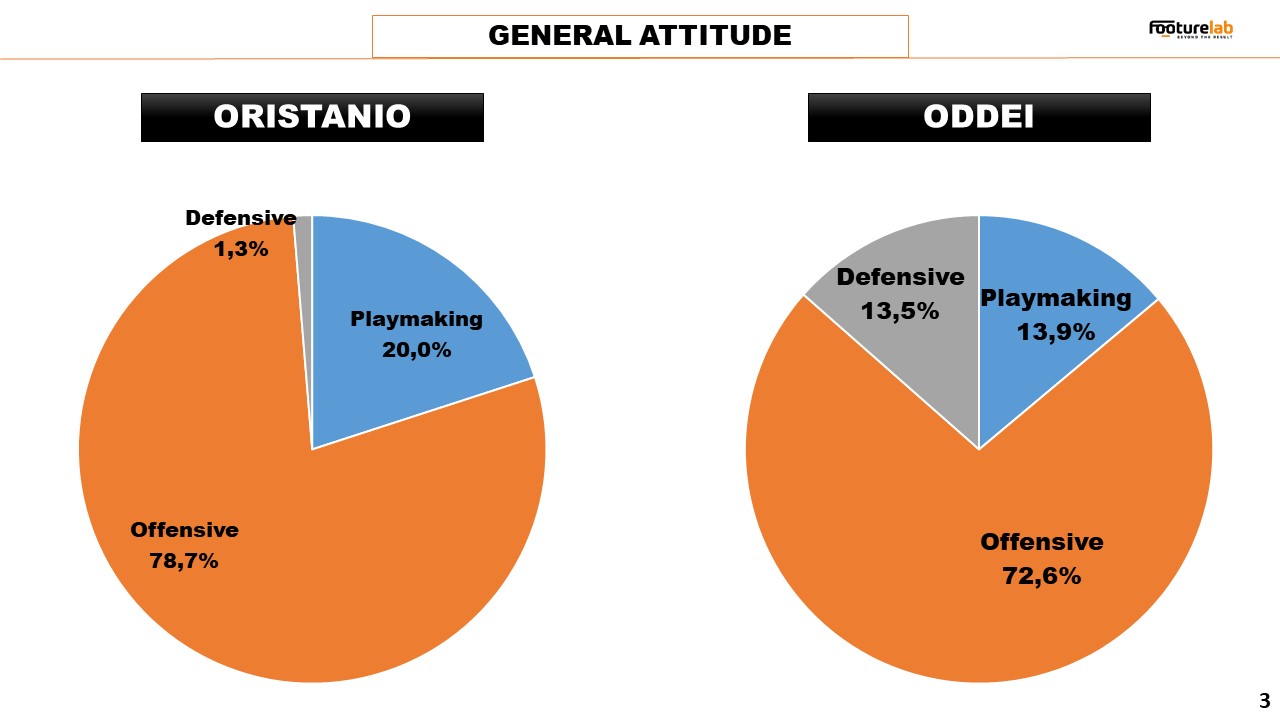 General attitude of the two forwards in the Primavera 1 league

Let’s go into more detail about their offensive qualities, both in terms of individual tactics and applied techniques.

Oddei has his best quality in dribbling, where his mix of physicality and speed is fundamental for Sassuolo to create an advantage in the offensive and ultra-offensive zone; Oristanio, although he too has good speed and good dribbling percentages, expresses his best talent in goal shooting: most of his goals are scored on medium distance shots, even from direct set-pieces. 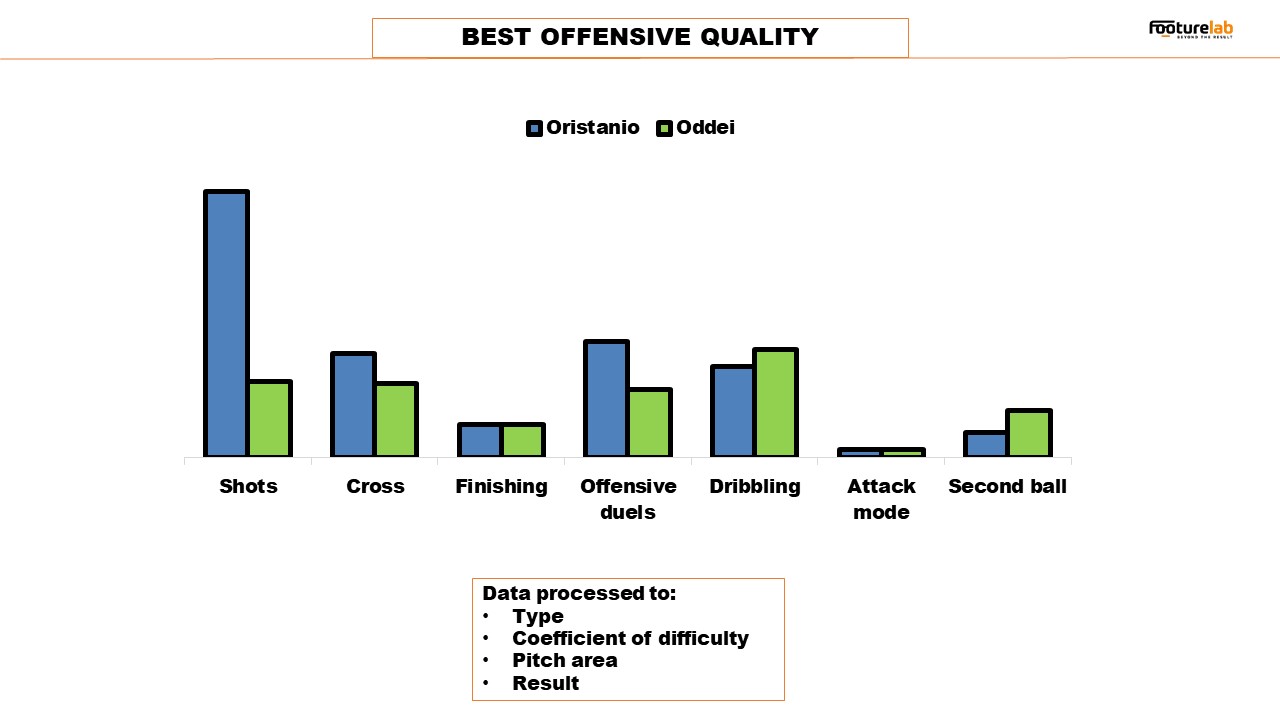 Processing of data about the offensive qualities of Oristanio and Oddei

From the analysis of the offensive movements, although the two often play in the same position, tactical differences emerge quite significant. Oddei is split to receive the ball mainly in width and match; Oristanio, instead, in more than half of the cases he splits the match and frequently also between the lines, to receive the ball in the finishing zone and turn to point the defensive line. If these characteristics highlight Oristanio’s natural attitude to act as an attacker in the half-spaces, for Oddei they can be read more as functional to mister Turrini’s tactical idea: occupy the lateral space with the central forward and create space for the midfielders’ central insertions.

Statistics of movements in the last 25 m

The type of finishing passes of the two players is sensibly linked to their offensive movements: Oristanio looks for the last passes and the cross in the same percentage, while Oddei prefers the finishing through lateral balls, cross in a particular way. Between the two Oddei has higher numbers and percentages of efficiency: this is testified by the 8 assists of the current season.

One of Brian Oddei’s 8 assists

In the analysis of the goal shots, a clear superiority of Oristanio emerges: the number of his goal shots and the number of goals scored compared to the minutes played is much higher. Oddei always kicks on the action, from inside the penalty area, mainly on the left and more rarely on the right; Oristanio, on the other hand, kicks mainly on action but looks for the goal also from a direct set-pieces; almost always on the left, never on the right and, despite a not high stature, sometimes also on the head; 2 times on 3 from inside the area and the rest from outside the area within 25 m.

A penalty scored by Oristanio

As far as ball control is concerned, our two young talents prefer control-oriented to stop control, Oddei even more than Oristanio. They both use largely their dominant foot, the left one, but Oddei receives more under pressure; despite this greater difficulty, Oddei shows higher percentages of positive outcomes compared to Oristanio, which testifies by the player of Ghanaian origin a better quality in this technical event. 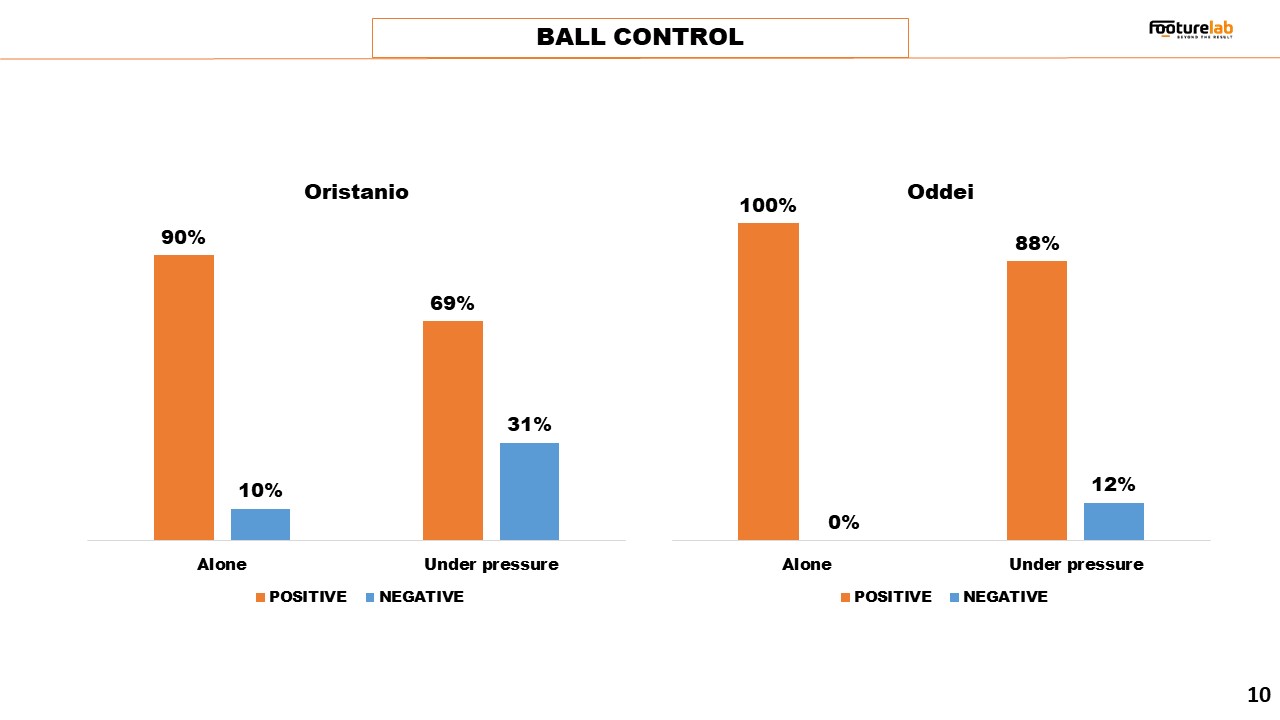 Statistics in the ball control of the two forwards

They both have very good percentages in ball protection. Despite the slimmer physique, those of Oristanio is even a little higher. A key to interpreting this figure could be the greater energy of the Inter Milan player compared to his opponents when he is called upon to play, since, as already mentioned, most of the minutes played by him come from taking over the match in progress.
<“text-align: center;”>

Ball protection and dribbling of the forward Oddei

In the phase of non-possession, an evident gap emerges: Oristanio’s contribution in the Nerazzurri team is limited to the recovery of some second defensive ball; Oddei shows, instead, to have excellent qualities in the feet advance, in the tackle and especially in the intercepted passes. This should not be surprising, given the different physical and athletic abilities existing between the two, which rewards Oddei, both for the tactical context in which the two often find themselves.

Let’s give these two young forwards the last two starting shirts of the Top 11 of our F2002ure Team, they deserve it. They have done well so far and with the experience, they have gained they will certainly do better next season. We will continue to follow through the analysis of the sports data of the Primavera 1 championship the evolution of them and all 2002, heritage and future of Italian football. 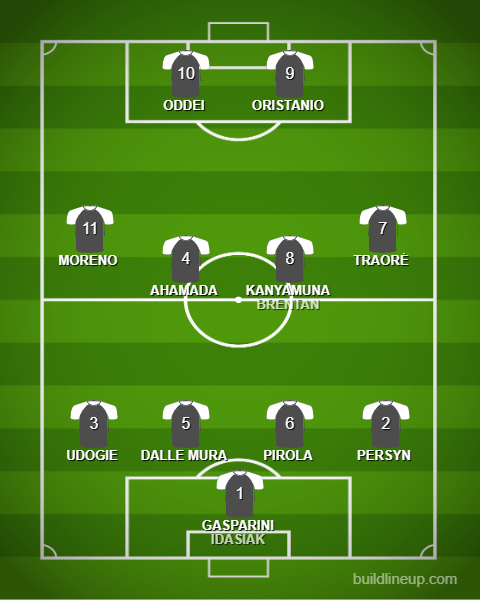 A simple overview, in which we haven’t mentioned players who are distinguishing themselves with their performances, such as Ruggeri and Panada from Atalanta, Bove, and Zalewski from Roma, just to name a few; or for evident reasons, we haven’t included Sebastiano Esposito from Inter, who is now stable with Antonio Conte’s first team.

According to Footure Lab’s performance indexes, several of them have confirmed their medium-high levels in this league while others will have another year to confirm their growth in this category.